Nearly a year after its successful introduction, the award-winning
LaneAlert 2x™ is now in production.

“It has been a challenging year perfecting the formulas and processes needed to make it the effective, quality product that we demanded.”, states Greg Driskell, president and co-founder of PPP, Inc and the inventor of this incredible pavement marking. “One thing I’ve learned about product development is that there is a complex path in making something simple. The simpler the product the more complex the process.”

The LaneAlert 2x™ is an innovative marking with directional messaging. Innovative in that it is a pavement marking that displays an inlaid message that can be seen, or not seen, dependent upon the direction the road user is traveling.   The primary purpose of its design is to provide a visual warning to motorists who are driving in the wrong direction, resulting in self correction, and more importantly, avoidance of a tragedy.  Unlike a conventional bidirectional pavement marking, the message on the LaneAlert 2x™ can be seen clearly by the wrong way driver, but virtually disappears when driving the right way. The LaneAlert 2x™ also reduces the undue distraction and confusion of a motorist traveling in the correct direction.  Unlike posted warning signs, the LaneAlert 2x™ is applied directly on the pavement of the travel way, where studies show impaired or distressed motorists focus most. This makes LaneAlert 2x extremely conspicuous and effective. 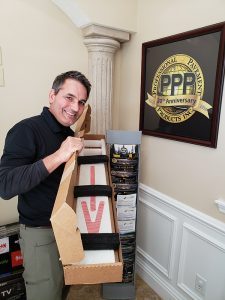 The most significant changes made to the LaneAlert 2x™ since its introduction early last year are its material composition, and application process.  The first generation of this ‘Marking with a Message’ is made of a special formulated thermoplastic compound with integral color and retroreflectivity. “We wanted to make sure that we came out of the gate with a durable product that could be used where wrong way driving begins – at the intersection,” Driskell says, “and our thermoplastic compound does just that.” 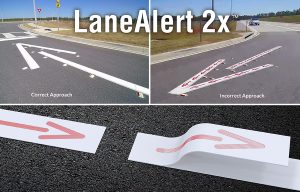 The PPP mantra of developing Safe, Smart, Simple transportation safety solutions is seen in the LaneAlert 2x™.   It is safe for the road users, providing a clear, concise message to wrong way motorist without distracting right way motorists. Smart, in that it does so with no mechanical or electrical dependence. And simple, using the familiar installation practices of widely used preformed thermoplastic.  Most importantly, is the affordability.  Most existing countermeasures come with a significant price tag, especially if implemented across the primary system.  With the LaneAlert 2x an agency can spend as little as $500, the cost of an average messaged stop bar, and improve the safety of their roadway.

Driskell states, “Ultimately our core purpose as an organization is to ‘Provide the world with affordable, innovative transportation safety solutions that effectively save lives and reduce injuries.’ We do this through discovery and development of inventive, innovative and effective solutions that overcome the barriers of economy and geography.  The LaneAlert 2x™ is the Poster-Product for this purpose.”

With the LaneAlert 2x™ introduction at the American Traffic Safety Services Association, Intertraffic show in Amsterdam, American Public Works Association and the International Road Federation expositions last year, there are literally hundreds of agencies around the world awaiting its production release.  To proof out the effectiveness of this countermeasure, PPP will initially be working closely with agencies both in the US and around the world with pilot projects and studies. “These are exciting times for us, and we are blessed to be the providers of such a wonderful solution”, states Driskell.