In the January Caltrans’ CTCDC meeting, the board gave approval to move forward with the experimental use of the innovative wrong-way driving countermeasure LaneAlert 2x™ on California roadways.

According to Troy Bucko, Caltrans Transportation Engineer and Traffic Safety Systems Coordinator, the California Department of Transportation (Caltrans) has been piloting enhancements for wrong-way motorists after incident rates involving them were unusually high in the first half of 2015, particularly the Sacramento and San Diego regions of Caltrans District 3 and District 11, respectively. 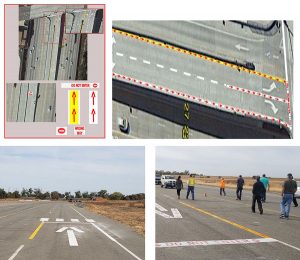 Caltrans was approved by the CTCDC to test 5 different configurations of the LaneAlert 2x™. Additionally, Caltrans has embarked on an aggressive pavement marking initiative to improve the safety of their roadway infrastructure of today and prepare them for the Connected and Automated Vehicles of tomorrow.

With a substantially mixed fleet of both man and machine drivers over the next several decades, it’s important to keep both in mind when making decisions about roadway safety infrastructure. The LaneAlert 2x™ is a ‘marking with a message’ that uniquely provides mono-directional messaging on a bi-directional pavement marking. The purpose is to provide a clear and concise warning to the wrong-way human (and eventually machine) driver, with little to no distraction to the right-way driver. Beyond today’s motorist, the need for LaneAlert 2x™ could increase as the Connected and Automated Vehicles and their Artificial Intelligence and cameras systems advance.

“I learned many years ago that there can certainly be too many visual cues and messages on a roadway. These guidance devices, if too many, can actually increase distraction and confusion to the human and machine drivers,” states Greg Driskell, president of PPP, Inc., and inventor of the LaneAlert 2x™. “We wanted to provide the right message, to the right driver, at the right time, in the right place. With LaneAlert 2x™ we accomplish this.”

Troy Bucko and his team have witnessed the development of the LaneAlert 2x™ nearly from its ideation,” Driskell shares, “It is kind of funny, we had just begun this pseudo secret development project and I was attending the American Traffic Safety Services Association Expo’s Circle of Innovation, – to my appreciation the topic was wrong-way driving countermeasures. Suddenly this guy in the front row blurts out, “Why can’t we just have a marking that shows white one way and red the other?” It kind of freaked me out. He nailed it, that was our secret project! The guy was Joe Horton, Supervising Transportation Engineer of Caltrans. I felt I had no choice but to share with him what we were doing. Caltrans will not only be the first state agency to widely use the LaneAlert 2x™, they’re also the very first agency to know of its development.”

The LaneAlert 2x™ is consciously and uniquely designed to cause self-correction among impaired drivers. “These being the greatest cause of such accidents, are our primary targets,” says Driskell. The combination of the LaneAlert 2x™ colors, symbols, and profile are designed to create that clear and concise message to these motorists.

PPP and Caltrans are excited at the likely effectiveness of the LaneAlert 2x. “It’s the most innovative treatment for Wrong-Way prevention I have seen in my 20 years,” says Bucko. This positive feedback of the LaneAlert 2x™ continues on both the national and international stage, winning innovation awards at both the 2018 American Traffic Safety Services Association and the International Road Federation competitions.

“In the end, this is all about saving the lives of our fathers, mothers, sisters, and brothers that are lost in these horrific accidents,” states Driskell. “Our hope is that agencies around the world will implement these and other Safe, Smart, Simple countermeasures in their efforts to move “Toward Zero Deaths.”