The ‘‘So What?’’ of Mobile Retroreflectivity 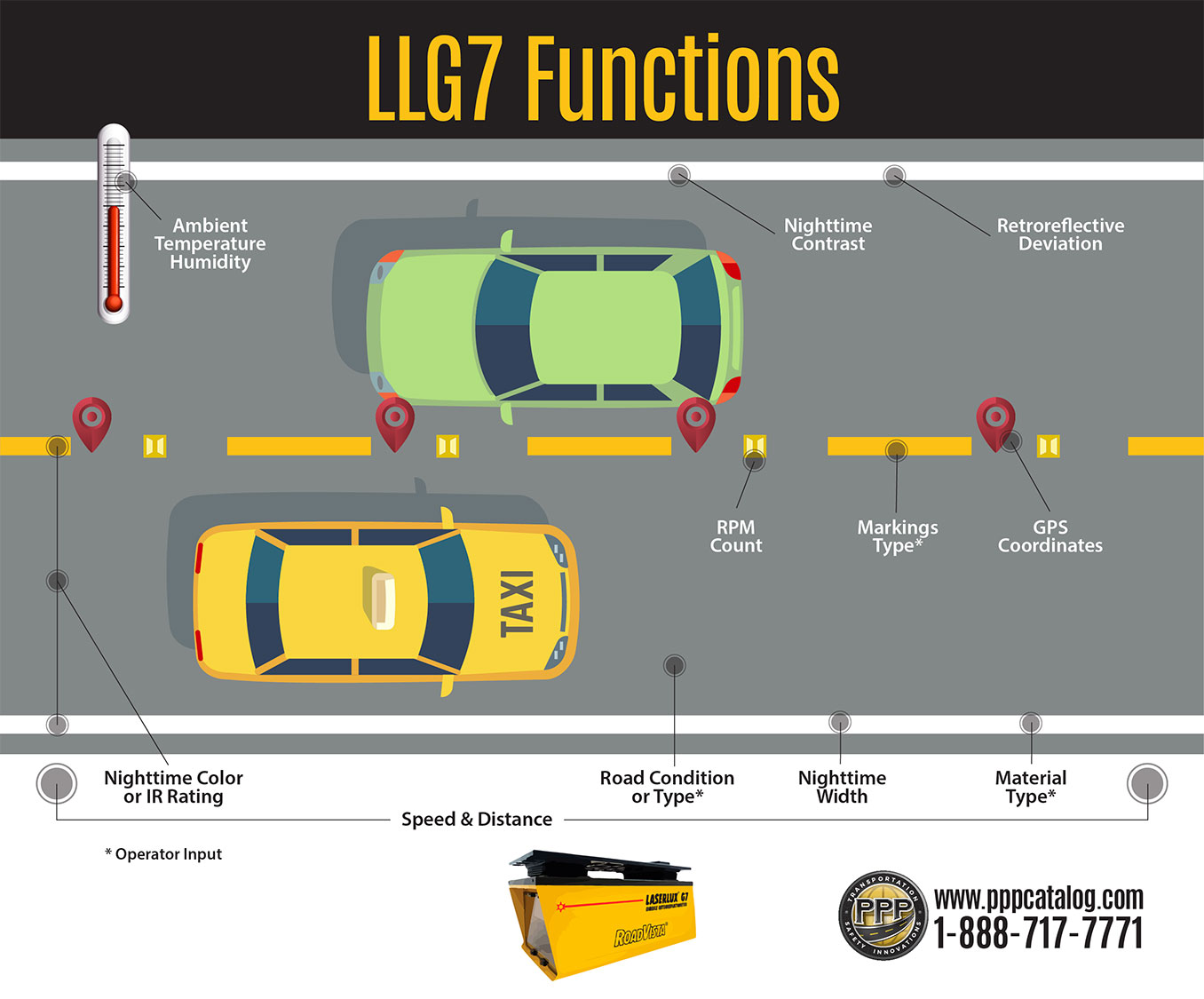 A long time ago, I was explaining the features of one of our new products to a mentor.  He surprisingly responded, “So, what?”.  At first, I couldn’t tell if he didn’t hear me clearly or if he was just rude.  He then explained that features mean nothing until the customer can relate to what function they serve.  Further, that function needed to be relevant to their needs and environment.

The RoadVista LLG7 Mobile Retroreflectometer is full of unique and high-tech features.  Like the Auto Positioning System that manages the units precise geometry to the roadway, or the versatile Squid Mount system that securely attaches the LLG7 to most any vehicle. These are fantastic features for sure.  However, the question remains, “So What?”

In this spirit, we created the LLG7 Mobile Retoreflectometer Features and Functions webinar.   I invited Chris Adkins, our retroreflectometer expert and “Master and Commander of All Things Shiny” to share the mic.  His job was to present the LLG7’s features, and mine was to answer that question, “So What?”.  I did so by sharing my personal experience of how it functioned in the field. As many of you know, last year, I participated in the pilot of our Measure Across America Program (MAAP) initiative.  The MAAP initiative took us 1,100 miles on thirty-eight roadways and across five states, registering over 16 million scans of the markings along the way.  It was quite an experience to spend that much time operating the LLG7.  I know there are folks out there with far more miles using the LLG7, but this event helped me to see its functionality through the eyes of the contractors and agencies.  It also helps me better answer the “So What?” question.

I have listed below a few of the features of the LLG7 and how it performed its’ functions in the field for us.

The LLG7’s Small Compact Size – Its compact size made it easy to store in the hotel room or car and transport from one to the other.  Also, at only about 12 inches wide and a tight-fitting Squid Mount, it did not significantly increase the footprint of our vehicle, reducing the concern of impacting the unit on curbs and obstacles on the roadway.

400 Scans Per Second – We got a comprehensive sampling of the roadway markings, even at an average speed of 52 miles per hour.  Also, with so many scans, I didn’t have to worry about the occasional anomaly like a dead animal on the line!

One-Meter Scan Width – With this broad sweep, we were able to navigate in the center of the lane, safely away from oncoming traffic.  This ability was especially helpful since we were using the Tesla’s Autopilot system.  Even a double yellow marking only took less than half of the total scan width, which made it less stressful keeping the markings within the swept area.  A set it and forget it thing.

Wireless, WIFI Based Operation – Several things we liked about this.  With only one cable for the power, setup and operation were easier.  Also, occasionally, we were able to use one of our smartphones to operate the LLG7, while the computer was utilized for other functions.  Since the LLG7 is operated through a browser, we didn’t have to worry about losing data if we intentionally or unintentionally became disconnected.

Simple Calibration – This feature allowed us to get up and running quickly with no need to locate a particular area for calibration.  We did this in the hotel parking lot, the Tesla charging station and even on the side of the road.  Moreover, we did it quickly, in only a couple of minutes.  When you get out there, you simply want to get started, and this required little time between leaving our hotel room and getting on the road.

Auto Positioning System – The geometry or height and tilt of the unit is critical in getting accurate measurements.  With so many miles being measured, many variables could change the position of our vehicle.  However, I was always confident that the LLG7 remained in the correct position throughout the assessment.  It also made the setup easier.  I just had to set the initial height and levels, then it maintained them.  Oh, I loved the ability to put the unit in Home position during stops.  This very convenient feature lifts the LLG7 to about 7 inches for clearance of those pesky parking lot pavements.

Squid Mount System – The most significant function of this feature was that I could use my vehicle of choice.  In our case, it was our Tesla Model X.  I didn’t have to modify the vehicle and got the LLG7 attached in about 6 minutes every morning.  Also, after seeing it hold so well the first day or so through hundreds of miles of varying roads and dozens of stops and starts, I grew confident and worry free about its stability and security.

Customizable Settings and Fields – This was especially useful in ensuring that we got the data that we set out to get.  We were able to customize a lot of the buttons and information which made the data management from the operation screen a breeze!

That is only to name a few. Within the next week, we will be releasing the recorded presentation. In it, we cover even more of these features and how they functioned in the field. Additionally, we will share a few of those data points acquired in the MAAP initiative.  It will be on our YouTube Retro Technologies – LLG7  Playlist, so be sure to watch for it!

I challenge you that the next time someone tells you about the features of their product: Ask the simple question, “So What?”